You will be directed to your specific country page For this event we equipped ourselves with an Image 3, E2, Virtuoso, and the highly anticipated Clinicare 100 HF. Also accompanying us were Account Managers from the Midlands and South West regions, allowing the TVN's to see friendly faces on the stand.

Over the two days we had many TVN's visiting the stand, the biggest hit as expected was the Clinicare 100HF the hybrid mattress. Many people were captivated by its ability to covert from passive to active by attaching the pump. Also with it's Micro Climate features and its ability to alternate pressure.

LINET UK was also pleased to see the Dartex team who created the cover for the Clinicare 100 HF. Dr Dartex even came along for a photo. 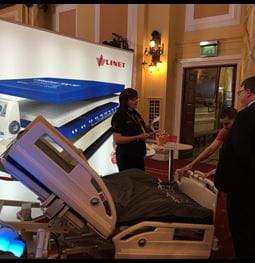